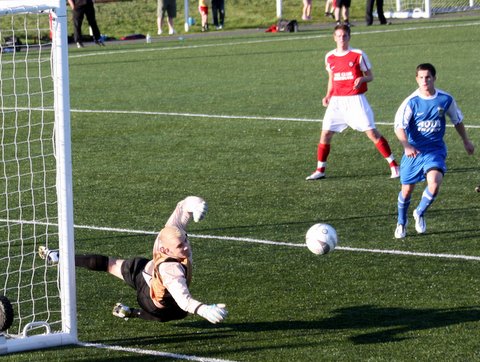 In the sunshine at Albyn Park and what a great night it was for Broxburn Athletic Colts as they roared to a brilliant 3-0 triumph against Greenock combine, East End United BC. Broxburn had a wonderful success in front of a terrific turnout of fans. Broxburn at that stage led 2-0, an almost unbelievable scoreline considering the start made to the final by this very good young side from Greenock. This was my third time covering the Lady Darling Cup and on each occasion, the first two in the twice played semi-final against The Celtic Boys Club, problems arose and I was told, jokingly, that I was the ‘common denominator’ in all three games.

The very good young Greenock side had much the better of the opening exchanges and, indeed, looked likely to score. Big No 9, Martyn Paton, was dangerous in every raid on the  home goal. In midfield, No 18, Brendan Granna, was quite magnificent. Others, too, weighed in, and Broxburn were forced to defend their goal. David Gardner was tremendous in the home defence while Gary McLachlan was nothing short of outstanding. On the right wing, Joe Brady, used his pace against Jamie Mason, but the East End No 3, proved to be no pushover. Play settled down sufficiently for the home No 15 Calum Muir and other good attackers in the Broxburn ranks to get in to the game as an attacking force. But East End United ‘took no prisoners’ when Broxburn attacked and the ball at times was virtually belted away by the Greenock defence. Ryan Guiller looked good for East End, so too did the hard-working No 10, Chris Murray. The pace of play was in fact, nothing short of electric. Maclachlan was  up in the East End goal to challenge for a corner from the left and goalkeeper, Paul McMillan appeared to misjudge the flight of the ball and it crashed wide of the right hand post. Wow! Ryan Bryceland slammed a wonderful effort from 25yds out at the Broxburn goal but home keeper, Gavin McQuillan - a real hero on the night for the West Lothian club - went down to knock the ball wide then collect the loose ball. Great play from both teams. Paton sent a superb header just over McQuillan’s crossbar then the East End No 9 tried his luck again, but the resultant shot was a trundler and easily cleared. So many close things,but the closest of all was a thundering shot from Paton from well out, just to the left of the Broxburn goal, and McQuilan was beaten by the pace of the shot - but it crashed back in to play off the face of crossbar. “Could this then be an indicator that it was ‘going to be Broxburn’s night’ Or was it, indeed, warning shots from East End United BC of more to come?” There were signs, however, that Broxburn had settled and they looked good when they moved on the East End goal. It was, indeed, wonderful  to watch the cut and  thrust on the playing field. And the huge crowd basked in the sun! East End continued their good raids on the Broxburn goal and Paton, again, went close to breaking the deadlock! Then, goodness me, the final was turned on ’its head’ as Broxburn took the lead! AGAINST THE RUN OF PLAY. 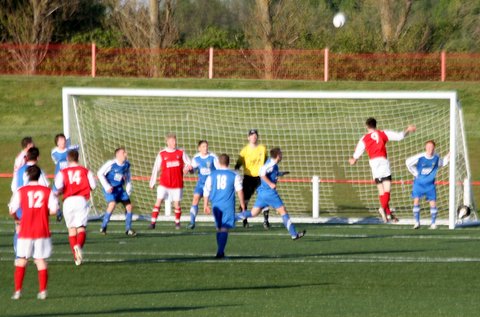 A wonderful ball was hurled in from the left wing and there at the far post was the man-of-the-moment, JOE BRADY! This very good young right winger turned inside his marker, Jamie Mason, and his left-foot shot went in to the East End net, despite brave McMillan getting a hand to  it. First blood therefore, to Broxburn. And what a lovely co-incidence it was for Brady to score. There, to see him play, was his father, Jimmy, who was in the Blackburn under-21s that won the Lady Darling Cup - 30 years ago! Then, the proverbial ’roof fell in’ on East End United BC when a wonderful cross in to their goal was headed past McMcMillan by Maclachlan. Broxburn led 2-0 and were in many respects in ’seventh heaven’! East End United BC were stunned and they must have wondered  what they had done wrong to find themselves trailing by two goals. It was incredible, indeed, that Broxburn had more or less established a match winning lead after being on the receiving end for much of the first half. Just before half-time, it took a truly magnificent last-ditch tackle from Broxburn’s Gary Maclachlan to halt a run on the home goal by Ryan Guillar. I have to say, when I see tackles such as this one was, it took my breath away. Well done, indeed, Gary and tough luck on Ryan as I think he would have scored for East End United. However, after an ’eventful’ first half, Broxburn led 2-0 at the interval. My heart went out to the Greenock side in the second half! They played very well and had an equal share of the attacking play. But this was just ’not their night’! No, indeed! Fate decreed otherwise! Chris Murray worked his socks off in a bid to get East End back in to the game. Broxburn defended well, had good players in midfield and looked superb when attacking McMillan’s goal. Joe Brady had a great run and his superbly hit shot at the East End goal produced an equallty good save from McMillan. Darren Downie again  tested the big keeper with a good effort. And, still, nothing went right for East End United. All their good work did not produce the goal they needed to get back in to contention. Broxburn, on the  other hand, looked to be full of confidence and I was struck by the good sportsmanship from the players on the  pitch. It was the home side that scored again when a shot from Ryan Slessor, from  the right of the East End goal, was deflected off a defender and over McMillan in to the back of the net to make it 3-0.

The individual awards and magnificent silver cup that was first won in 1942 by Portobello Renton was handed over by SYFA official - Ian Richardson (Bonnyrigg Rose). It was a nice closing ceremony to the game and the behaviour and sportsmanship of the losing squad was exemplary.  Broxburn celebrated their magnificent win in  time-honoured fashion. Well done, however, to the brilliant Broxburn squad and please, keep playing at a high tempo and go on to even greater things next season. Hard luck to East End United BC. A super young side with lots more to come, I think. How or why did they lose 3-0? Don’t ask me, I am still wondering how it happened. I have to admit, however, I am very pleased for Broxburn Athletic Colts. I think they have the potential to become a great football club, given the chance by those who rule the game in Scotland. There was a programme for the game again and the venue was just perfect. 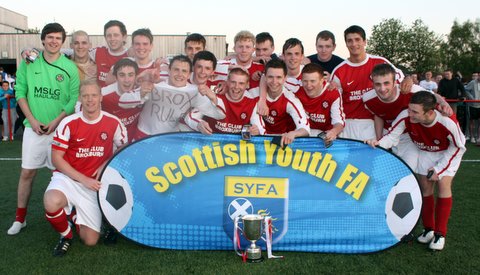 SYFA wishes to thank Ian Mackay for his wording and pictures on this page about Lady Darling Supplementary Cup 2012.